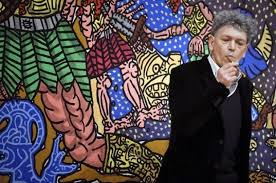 Robert Combas is a French painter, sculptor and illustrator born in 1957 in Lyon.

Passionate about music, he participated in the birth of the movement of free figuration in the 1980s. Considered as one of the most important French artists of his generation, he has been part of the Artprice ranking of the 500 most singer artists for several years. in the world. He lives and works today in Île de France.

As a child, his family moved to Sète. At the end of high school, he went to study at the School of Fine Arts in Montpellier. It was at this point that he defined his artistic style in opposition to conceptual art, predominant on the artistic scene of the time. The idea of ​​focusing on the concept alone of the work does not seduce the artist, who on the contrary likes to draw shapes and contours. Not belonging to any artistic movement, he advocates the freedom of creation. He begins a series of paintings, "Battles", then deals with the underdeveloped countries with irony and sarcasm, creating the movement of "Arab Pop Art". His style is so brutal. In 1979, while freshly graduated, Bernard Ceysson invited him to present his paintings in Saint-Etienne as part of the exhibition "Après le classicisme".

At the beginning of the 1980s, a change of artistic paradigm loomed on the horizon. Robert Combas and Hervé Di Rosa grew up together in Sète. A time separated because of their studies, they find themselves once graduated in the same salons Paris. They meet Bernard Lamarche-Vadel, art critic, Rémi Blanchard, Jean-Charles Blais, Jean-Michel Alberola, Denis Laget and Catherine Viollet - all five artists - with whom they organize an exhibition in the apartment of Vadel in 1981. Free figuration is born. The name echoes the American artists of the time, and is characterized by unbridled joviality. For these young artists, there is no question of dawdling in front of a work or entering a romantic and romantic contemplation. Their canvases inspire happiness and laughter, joy and good humor. The movement contrasts sharply with the art of the 1970s, serious and austere, and is on the contrary devoid of any negative feeling. Pessimism, nostalgia for the past, the fear of the present, the anguish of the future ... So many states that are proscribed in free figuration! These artists are part of a new generation comfortable with his era, tired of feeling guilty about a bygone past, and they translate this feeling into painting. In parallel with graffiti in the United States, the development of street art and the advent of rock, it is a new world that appears, adept of popular culture and freedom. Themes such as sexuality, love, comics, music, are approached with simplicity and naturalness.

His life is painting and his painting is life, Robert Combas crunches the world, he chews it and spits it to pieces. In his parallel universe we kill each other but do not die, love and sex rub shoulders with war and violence.

Robert Combas, exorcise the dramas of history by interpreting them with his poetic and humorous writing, he decrypts the world, embellishes or blackens it as he pleases, he takes us on an incredible musical and colorful adventure.