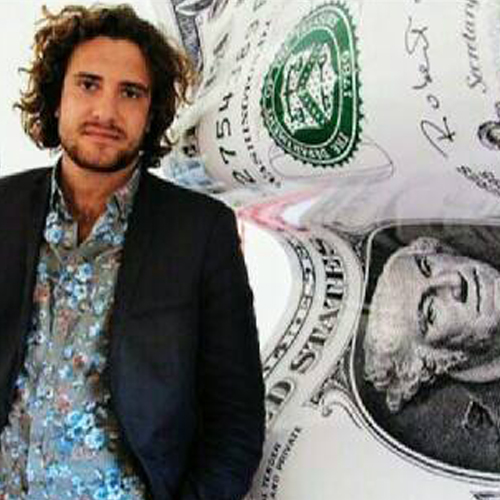 Renowned artist Karl Lagasse made his name in 2009 with his sculptures One Dollar. The same year, Artprice ranked him among the top ten sculptors in the world under 30 years. In 2012, the New York publication Farameh named him among the fifty best contemporary artists who drew their inspiration from traditional American icons in his FOR WHICH IT STANDS: Americana in Contemporary Art. More recently, at the Art Paris Art Fair 2016, the President of the French Republic personally congratulated Karl for the success of his One-Dollar bronze 2 meters exposed at the Grand Palais.

Karl began his artistic career with collages at the age of seven. That year, his meeting with the French sculptor César Baldaccini pushed him to continue along this path. Later, he ventured into the Paris metro, the tag and graffiti becoming his preferred mode of expression. Nevertheless, collages remained his true passion. It is the artist Yvaral Vasarely who suggested to him to integrate his tags to his collages. In 2003, Karl was preparing his first exhibition in Paris. His first personal exhibition presenting his Buildings was held in 2006 at the Isy Brachot Gallery in Brussels. Two years later, Karl was back in Paris at Espace Pierre Cardin for his first solo exhibition of paintings and sculptures featuring video and photographic elements.

Above all, Karl likes to unveil his new works at international exhibitions: in 2011, at the Art Monaco show, he was represented by the Bel Air Fine Art gallery, with his creation Cryptogram One; in 2012, he presented One Dollar on the theme "In God We Trust" during a solo exhibition at the Artco France gallery; in 2016, his solo exhibition at the Atrium gallery in Marbella (Spain) was inaugurated by the mayor of the city who spoke about his works to the international press.

In 2010, Karl was chosen to represent the city of Deauville (Normandy) at the Horsemania equestrian world championship in Lexington (United States), for which he made a sculpture representing a horse in honor of this manifestation. Returning to Deauville, in 2012, Karl offered the city Cryptogram One, bronze carrying a message of peace and love, which was installed at the entrance of the city and inaugurated by the mayor, Philippe Augier. The same year, in collaboration with Corbis he made a monumental sculpture for the sixty-fifth Cannes Film Festival, using photographs dating from 1945 to 2011 to realize this work that was exhibited at the Carlton Hotel. , where the artists present at the festival could sign it. Alexandra Lamy, Gad Elmaleh, Bérénice Bejo, Marie Gilain, Michael Youn, José Garcia, Michel Hazanavicius, Nadine Labaki, Cuba Gooding Jr., Tim Roth, Matthew McConaughey and Zac Efron have done so.

In an article published in 2016 citing, among other prestigious artists, Jeff Koons, France Culture mentioned Karl Lagasse and his monumental installation, entitled A Piece of Heaven on Earth. This installation consists of a Maserati covered with a white plastic film and a statue of Jesus Christ, at the foot of which several dollar sculptures represent the repayment of the greatest debt of humanity. It was presented at the Art Paris Art Fair 2015, in collaboration with the Italian luxury car manufacturer. Maserati contacted Karl for the first time in 2014, to collaborate on the global launch of Ghibli. Karl used this model to create his masterpiece, Psalm 2. Celebrating the 100th anniversary of the brand, it was presented to the public at the Art Paris Art Fair 2014.